The Power of Starting Something Stupid

The Power of Starting Something Stupid 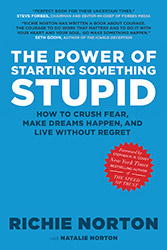 The Power of Starting Something Stupid captures a profound idea—that new ideas often seem stupid at the beginning, which makes them so easy to dismiss! I wonder how many good ideas were never acted on because they seemed stupid? In thinking about this, I realized that dismissing an idea as stupid is a brilliant way to avoid stepping out and taking a risk. Of course, that also means it’s a brilliant way to not make any progress or accomplish important goals.
Of course, few of us say that. We are more likely to say that we don’t have the time, education, or money we need to move forward. And since almost all of us feel like we lack those, it’s a very acceptable excuse. But Norton shows why they aren’t really good excuses—they are always there, and many people have pressed through them to make amazing things happen.
It’s ironic to me how often I have heard myself or someone I know use those very excuses. At the same time, everything I have succeeded at has required me to get past those very limitations. I can’t think of a time where I had enough time, education, and money to do anything important. Every breakthrough or progress I’ve made came when I stepped out in spite of not having enough. In that sense, it was never a smart move. But it often worked out because the resources came over time. I learned how to manage time, I got an education as I moved forward, and found ways to get the needed money or found a way to move forward without it. All those reasonable excuses weren’t really valid.
I also liked Norton’s description of the “Deferred Life Plan” that many people are on—do what you have to do now (make money) so that you can do what you want to do later. Most people have bought into that idea to one degree or another—but really, what an unfulfilling way to live. Of course there are things that we have to do now, but I’m learning that often we don’t have to defer the things we want—we can pursue them now, and end up with a lifetime of great experiences. We just have to change our mind-set and embrace some risk.
How about you? Have you ever started something stupid only to find out it was a really good idea? What things have hindered you from taking that step?