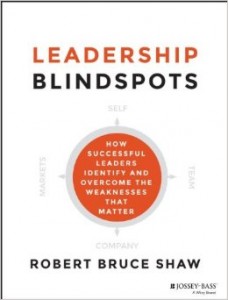 I think I fell in love with “Leadership Blindspots” before ever reading it. Over the last several years of ministry, I have become extremely aware of the presence of blind spots in myself and everyone around me, as well as how powerful and destructive they can be. By definition, we don’t see them, so we often don’t believe they are there, and that makes it very hard to believe anyone who would dare to point them out.

There were several items here that stuck out to me and which I have seen in churches many times.

Shaw points out that it is possible for a leader of a team to believe members of his team are performing at a high level when, in fact, the group lacks the capabilities needed to lead effectively. This can be a real challenge in a church setting. We want to be nice; we want to believe the best; we want to give people grace and not be judgmental, but all of these can lead to teams that underperform. There is nothing harder than facing the reality that our leadership team is underperforming and addressing that head on, especially if the reason relates to specific people who, although they may be wonderful people, don’t have the leadership bandwidth needed to get things done.

The second item that struck me was, “In the best firms, there is active debate before a decision is reached and strong alignment once a decision is made. Being able to debate and then align is a sign of leadership team strength.” It takes tremendous maturity to walk that idea out—debate vigorously and then embrace the decision wholeheartedly—especially if it is not the decision you argued for. That level of character is often rare. It’s much easier, and more natural, to hold back and not give your full support to a decision you may have disagreed with, which could cause the decision to fail (not on its merits, but due to a lack of support). Then you can feel justified, even though you may have caused the failure.

Finally, I loved the recognition that leaders need to have a close confidant they can speak to in total candor. It’s rare for pastors to have that person in their own churches, but I think it’s essential. We need to have safe, wise people we can vent to, who won’t think less of us or begin judging the people we are talking about. We need people with the maturity to let our issues be our issues and give us input and feedback on them without being pulled into them. In my experience, that is a rare person, but when you find one, they’re priceless.

I had a situation recently where I was in that position. I was venting to a friend about a decision, and I was upset that some of the people involved weren’t listening to me and valuing my experience the way I thought they should. My friend listened, asked some questions, and then gently and lovingly said, “It sounds a little like your pride has been touched. You might want to consider that as you think about how to respond.” I was so busted! But it was enormously helpful, and it changed both how I felt and how I acted. Friends like that are worth their weight in gold.