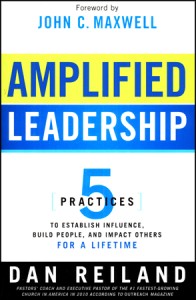 All leaders I know want to amplify their impact. I think that desire is probably part of the DNA of leadership. Dan Reiland gives some great insight into how to do just that. There were a couple things he said that dovetailed with some of the things I’ve observed over the years.

The first one relates to hiring people you like. Reiland says, “It’s important that you like the people you are with forty to fifty hours a week. When I was younger, I hired for competence first. Now I hire for chemistry.”

I see it the same way. There are many competent people out there—many people who can get the job done. But if they aren’t people I enjoy spending time with, they aren’t the right ones for the job. Think about it—even if they are good at what they do, the workplace itself won’t be a positive place. It might not be horrible—it’s not that extreme—but there is a synergy that happens and a momentum that comes when people really enjoy working together. They end up performing at a higher level.

I think sometimes in the church we shy away from that. It can seem fleshly, selfish, or unfair to think about hiring people we like. We think we should make hiring decisions on a purely objective basis, as if our emotions and relationships don’t matter. But that is not reality. It’s also not wise. Of course, I’m not advocating for hiring people who are incompetent just because we like them; I’m saying we should go for both.

The second thing he said that I have become increasingly aware of is that it is so important for leaders to be faithful, reliable, and disciplined.

He says, “This may surprise you, but people would much rather follow someone who may not be amazingly talented but is reliable. It’s because they can trust them. A disciplined lifestyle is difficult to maintain. Everyone knows that. So when people see a leader who demonstrates discipline, they are inspired. They begin to believe they can live out a similar discipline.”

I think this is a true statement, but it is also a learned truth. People prefer to follow someone who is reliable after they have seen the damage done by someone who is charismatic but lacks character. We are often easily impressed by good upfront skills or attractive personalities, but, over time, we see what happens when character is lacking.

Many people I know live with the pain of following an unhealthy leader. Although they impress from a distance, they also can be manipulative, controlling, and have a “my-way-or-the-highway” attitude. One taste of that and people switch to valuing faithfulness and reliability.