How To Be Exceptional

How To Be Exceptional 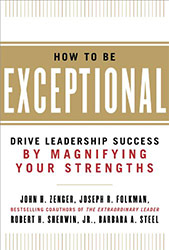 In reading, I was really intrigued with the concept of a “fatal flaw.” While every leader has weaknesses, it is self-evident that some have a particular weakness that overshadows everything else they do. The authors put it this way:

“One way to measure if a weakness is fatal is to note whether it is the first trait people think about when a person’s name is mentioned.”

I know someone like this, and it is a sad situation. The man is a gifted leader, but he has seen a steady stream of people leaving his church for at least the last 5 years. Most of them share a common story: he is highly controlling and they don’t trust him. Ironically, despite the consistency of that report, he doesn’t see it. I believe he thinks he is demonstrating strong leadership and the problem is on their end.

I’m not sure if it is his controlling behavior that is the fatal flaw, or if it is his blindness to the problem. Either way, the flaw is having a significant impact on his ministry, and not in a good way.

It seems to me like we have to be determined to recognize our flaws and to deal with them. It takes real courage to pursue the truth about ourselves and to ask the people around us, or the people who have left, to tell us the truth: “Is there something about who I am or how I do things that is undercutting me? Is there a place where I am my own worst enemy?” It’s all too easy to dismiss their feedback—or not pursue it in the first place.

As I think about it, the first step for the man I mentioned, or anyone, is to identify the flaw. After that, acknowledging it, either publicly or to the people who are closest to us, is key. That step of humility will go a long way in gaining back the ground we have lost.

And then we have to work on it. I think that is the easier part—once we have admitted to ourselves and others that there is a problem, we can get ongoing feedback and grow to a better place. But if we don’t recognize or acknowledge the issue, we are stuck.

So here’s my question—have you ever dealt with a leader who has a fatal flaw? A problem that is significantly undercutting their ministry—one that has become identified with who they are? What was the flaw, and how was it dealt with (if it was)?